The perfect bed for Miss Edith!

One of my tasks over the last couple of months has been to find the perfect bed for our eldest, Edith. Her cot bed which has served her well from the age of four months was beginning to look a little small! Plus Maggie, who turned two at the end of January only had a cot and so would soon need to go into a bigger bed.

I thought finding a bed for Edith would be a relatively simple task, but alas it has proved anything but. Mainly because of the need to make a decision as to what we wanted! Wooden or metal framed, cream/white or natural wood, bunk bed versus non bunk bed, trundle or not to trundle?!

I asked Miss Edith what she wanted and of course a bunk bed was shouted out with great enthusiasm. We toyed with the idea, but came to the conclusion it wasn’t quite right due to the fact we have a very active and fearless two year old who would spend the whole time climbing the ladder, probably when i’m in the shower and not on ‘watch!’

There was then the option of a fun cabin bed which often come with storage and maybe a desk, but again Maggie would be climbing and probably jumping off. Not something I relished! So, a single bed it was. The next decision was whether to go for a metal or wooden frame. We looked at the Great Little Trading Company and ASPACE but they only seemed to do wooden ones. They were all very nice, but I was after something a bit more traditional and classic and a bed which would feel right now and in 5-10 years time. I then had a look at the Feather and Black website and they sell the Oliver metal framed bed, (it comes in two colours; off white and duck egg). It was exactly what I was looking for because it had the traditional feel and I could imagine Edith in it in years to come. The only downside is, it doesn’t come with a trundle which could be used when Edith has friends over or we have relatives to stay. I decided I liked the bed too much though and thought I could just buy a bed in a bag or something similar for such occasions. 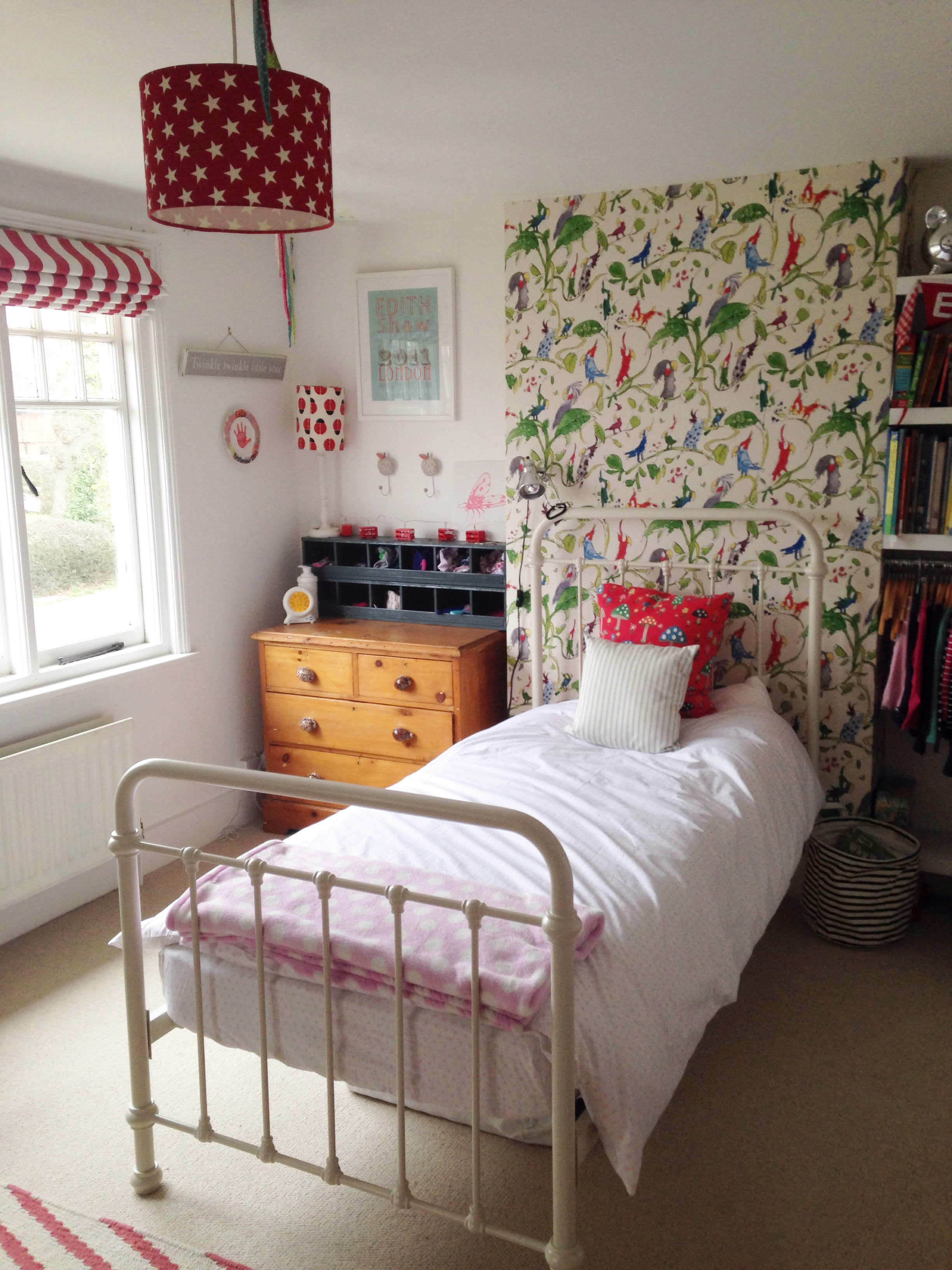 So after a couple of months of fairly painful back and forth indecisiveness, I took the plunge and bought the bed. Next job was finding bed linen which again fitted our remit of timeless yet fun, not easy let me tell you. I didn’t want anything which screamed children and I wanted something which Edith would still like when she was older. I looked everywhere, GLTC, ASAPCE, John Lewis, M&S. You name it, I searched for it! In the end I went for a fab star print from Feather and Black and a very subtle rose print from The Little White Company. Both of which Edith loves and feels very grown up in. I really liked the rabbit ‘Anorak’ set but thought it might be a bit too much with the bird wallpaper.  I do feel like a naughty parent though, as I didn’t present Edith with the option of a Frozen or Disney Princess duvet, but I just couldn’t quite do it! Shame on me I know! 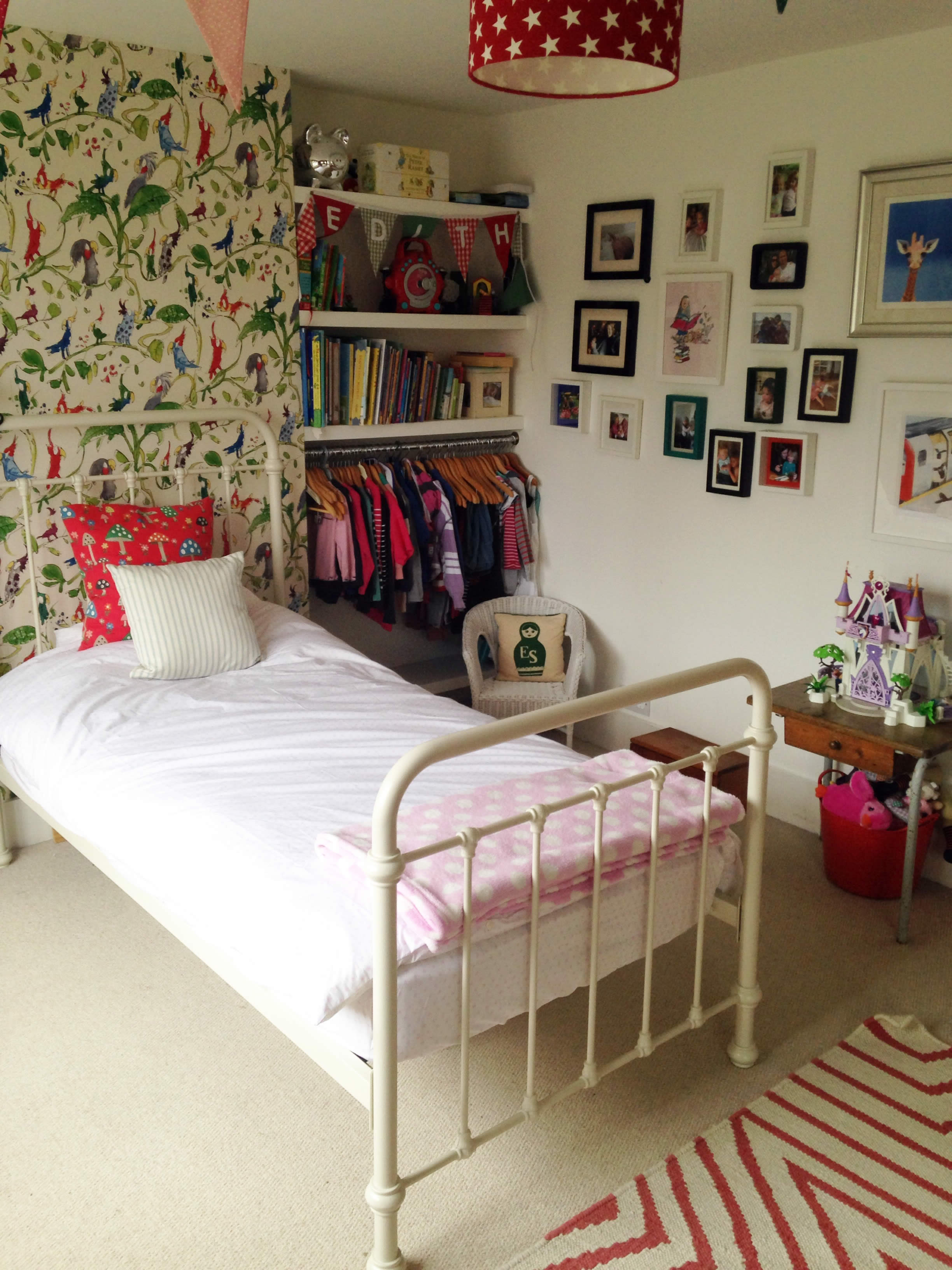 She is so excited about her new bed, it’s great to see. It just makes me laugh seeing her fast asleep in it as her legs probably don’t even reach half way!

We have now moved Miss Maggie into the cot bed that Edith had and though she is very happy to get into it, she has absolutely no idea what to do with the pillow or duvet. Every time I go in to check it’s covering her, I find her on top of it with her bottom in the air and facing the wrong way! She’s a mover so I think it will be a little while longer before she’s in one position, tucked up for an entire night!

Top tips and questions to ask when bed hunting:

The movement of beds is another reminder they are growing up. Next task, potty training Miss Maggie, joyous!

2 responses to “The perfect bed for Miss Edith!”